You are here: Home / Learning

Tulsi, or holy basil plant, is considered to be the beloved of Lord Krishna. Tulsi Vivah ritual is performed during the waxing phase of moon in Kartik month starting from the Kartik Suddha Ekadasi to Kartik Purnima. While performing the Tulsi vivah ritual women listen to the Tulsi Vivah Katha. There are several versions of Tulsi Puja story this is one of them.

Once there lived an old lady who used perform the Kartik Snan and then water Tulsi plant and offer prayers. She used to worship Tulsi without fail and used to perform the Tulsi Vivah ritual. After the ritual, the old woman always ask the Tulsi plant to fulfill her wish that her dead body should be carried by Lord Krishna to the pyre.

Tulsi Plant (Tulsi Devi) used to hear her prayer daily and she had the capacity to fulfill the wishes of her devotees but to make Lord Krishna carry the dead body of the old lady to the pyre was beyond her capacity.

Saddened by this fact, Tulsi began to wither and she started shedding her leaves. One day Lord Krishna visited Tulsi Devi and found her in a real bad shape and wanted to know the reason.

Then Tulsi Devi narrated the story of the old woman who daily asks for her dead body to be carried by Lord Krishna to the pyre. She said that she cannot ask Lord Krishna to do such a thing. As I cannot fulfill her wish I am sad and this is the cause of my sorry state.

Lord Krishna gave his usual smile and said that the wish of the old woman will be fulfilled and asked Tulsi Devi to forget about the problem and asked her to return to her glorious form.

On the last day of the Kartik month the old woman repeated her usual ritual and prayed for her body to carry to the pyre by Lord Krishna. After chanting the prayers, the old lady fell down and died immediately.

Her family members and neighbors arrived on the scene and decided to move the dead body of the old woman. But the body could not be removed. It had become so heavy that even 10 people together could not move it.

Tulsi Devi then remembered Lord Krishna. She prayed to the Lord save her devotee who is lying on her feet.

A large number of people had gathered at the scene as the news of the death of old lady spread and the subsequent miracle of the body becoming so heavy.

Soon a young boy appeared and asked what all the commotion was about. An elderly person narrated what had happened.

The boy said he will move the body and went to the dead body and chanted some words into the ears of the old woman and touched the body. The body now became lighter like a flower. The boy then shouldered the body to the pyre.

People gathered there were surprised to see this miracle. The pyre was lit and the young boy slipped out of the crowd.

Only Tulsi Devi knew that the young boy was Lord Krishna who had arrived to fulfill the prayer of her devotee.

Shabari is an elderly woman ascetic in the Hindu epic Ramayana. According to the Ramayana, she was an ardently devoted woman who received Lord Rama’s darshan and blessing due to her bhakti to Him.

Shabari was a hunter’s daughter and belonged to the Bhil tribal community. The night before her marriage, she saw that thousands of goats and sheep were brought by her father, which were going to be sacrificed for the marriage dinner. Moved by compassion, during the early hours of the morning, she renounced the world and ran away to meet a master. After days of traveling, she met Sage Matanga at the foot of the Mountain Rishyamukha and accepted him as her guru, serving him with devotion. When her guru Matanga was about to die, Shabari—now an old woman—says that after serving him throughout her life, she wanted to reach the same “abode of peace” which Matanga reached. Thereupon, the sage said that by the virtue of her sewa, Lord Rama shall give her darshan and asks her to wait for his arrival. Saying thus, the sage sitting in lotus posture attains Mahasamadhi. As per her guru’s words, Shabari waits for the arrival of Rama. END_OF_DOCUMENT_TOKEN_TO_BE_REPLACED

Once upon a time a prince met very beautiful young girl. He visited her house to see her but she was very chaste. The prince wanted to marry this beautiful girl but she didn’t want to marry him. So she said to him, “You want to marry me, you are attracted by my beauty, so I will distill my beauty in the next ten days, I will distill my beauty into liquid form and then you can  come and see  this distilled form of  my beauty.” So the prince said, “Alright.”  Then she said, “If  you still want to take me as  your wife then  you can take me.”  The prince replied, “Alright, that’s fine,  I’ll come  back in ten days and certainly I’ll take you as my wife my beautiful young maiden. END_OF_DOCUMENT_TOKEN_TO_BE_REPLACED 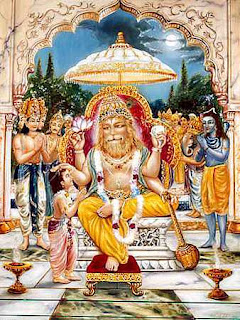 The mythological story of Prahlad, is described in Vishnu Puran as the fourth incarnation of Vishnu, Nara-simhavatar.

Prahlad was the son of the Asura king Hiranyakashipu. The Asuras were super-humans who lived in the underworld, unrighteous in act and were hostile to gods. Hiranyakashipu wanted to be the undisputed ruler of the three worlds – the heaven, the earth and the underworld. He performed severe penance to seek blessing of Brahma for immortality.